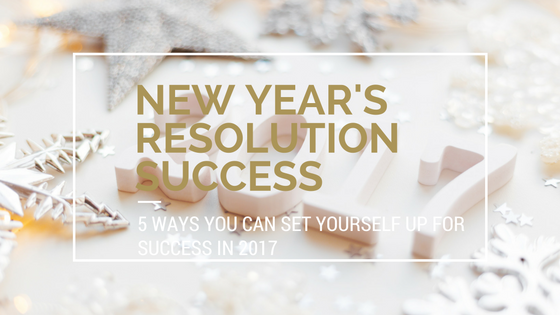 New Year’s resolutions have become little more than a joke for many, who recognize the folly of January gym memberships that go unused by the time March arrives. This skepticism is unfortunate, for the perception of starting fresh serves as a valuable boost for many, who, through careful goal setting and community support, are able to achieve the goals they set on January 1st. Research suggests that those who make explicit goals are ten times more likely to achieve them than those who fail to do so. Thus, while the failure rate is high for New Year’s resolutions, they’re still worth making.

If you’ve made and failed to keep New Year’s resolutions in the past, you might not be all that eager to begin again. But this time, you don’t have to face disappointment. The following five suggestions will help you develop realistic resolutions and actually stick with them:

1. Set Quantifiable Goals Focused on Behaviors
Ideally, goals will not just be quantifiable, but also focused on a specific behavior that you know you are capable of executing. To aim to lose a certain number of pounds or inches is admirable, but there’s only so much you can control. You can, however, control your behavior, and you’ll feel good every time you achieve a goal. An example of a quantifiable, behavior-focused goal would involve eating at least five servings of fruits and vegetables every day.

2. Set Mini-Goals and Reward Yourself For Reaching Them
Your larger goal may come to feel impossible, but if you have smaller, easier to achieve goals along the way, you may be more inclined to stick to your resolution. This will be doubly true if you promise yourself small rewards for reaching your mini-goals. According to researchers from Harvard University and the University of Southern California, even tiny, meaningless rewards have a huge impact on motivation. When you achieve a small goal and receive a small reward, you also receive a surge of dopamine, which encourages you to keep striving for additional goals.

3. Get Friends and Family Involved
Going it alone is a recipe for disappointment. Sheer motivation may provide some momentum during the month of January, but in the months following, you may struggle if you don’t have loved ones rooting you on or holding you accountable. If your resolution is to lose thirty pounds, let your loved ones know — and tell them that you’re counting on their help when you’re about to eat that extra serving or skip that much-needed trip to the gym.
A fitness partner could be your biggest tool for exercise or nutrition goals; a Kansas State University study found that the time and intensity of participants’ workouts increased by up to 200 percent when a workout partner was involved.

4. Track Your Progress Via Social Media
If you’re really looking to amp up your resolve, share your journey on social media. This approach is backed up by ample research, which indicates that the influence of peers is far more significant than that of motivational messages found online. A University of Pennsylvania study found that those placed in small networks fared better than those bombarded with inspirational messages.
Social media is most effective when used to form deeper relationships, so join a weight loss group or share your progress with your followers. Don’t limit your social media involvement to your successes — let your followers know when you’re struggling. Their encouragement will lift your spirits when you’re about to give up.

5. Accept Lapses and Move On
Far too many people ditch their resolutions for good, simply because they’ve given in to temptation once or twice. Accept early on that lapses will happen — and forgive yourself. New Year’s resolutions aren’t about perfection, but rather, about changing problematic behaviors over time. If you are in better shape at the end of the year, you can consider your resolution a success.

5 Reasons To Publicly Declare Your Goals, Not Hide Them

This error message is only visible to WordPress admins

Please go to the Instagram Feed settings page to create a feed.